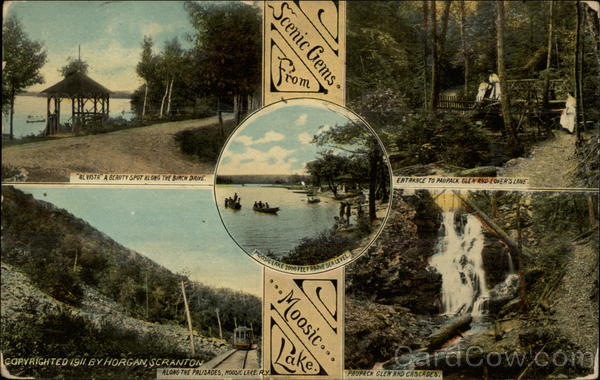 Alan Sweeney, a businessman with a love of history, was president of the Lackawanna Historical Society and chairman of the Lackawanna Heritage Valley Authority. He authored Journey Along the Delaware, Lackawanna & Western Railroad. In 2005, he co-authored Gateway to the Clouds, The Story of A Short Line Railroad, The Scranton, Dunmore, Moosic Lake Railroad, 1902-1926 with his wife, Judy. That same year, he also co-authored The History of Scranton for Arcadia Press. His one man play Witness at Appomattox debuted in 2006. Alan was a collector of toy soldiers and Africana books. He passed away on December 5, 2008.

I came to Moosic Lake through family. Since the 1940s my wife’s family had been enjoying the tranquility of this spring-fed lake sitting high atop Moosic Mountain. From the start, its beauty captivated me. Each passing season, I photographed the lake in all its picturesque radiance.

While watching my children and their cousins, and now even second cousins, discover the lake where their grandparents brought them, my love of history has been piqued.

The Moosic Lake of yesterday was a place reached only by steam train, eventually replaced by electric trolley. Equipped with this information, I began exploring some of the rail beds and maps that at one time brought campers and Scranton residents to an outing at Moosic Lake. Having been a rail fan since childhood, each new discovery wet my appetite for more information. The more I discover, however, the more I am led to the conclusion that too little has been written about this special place. Bits and pieces exist in various publications, but the history of Moosic Lake has not had the attention it deserves. With this book, I hope to rectify this lapse in local history.

It is my hope that this book will offer a fuller story of early Moosic Lake, paticularly in regard to the role that transportation played in its discovery. The story exists so the generation of today will have knowledge of the lake of the past.

Chapter One The Early Beginnings

Moosic Lake first appears on a map in 1873, on a map of Jefferson Township, published in the Atlas of Luzerne County by Pomeroy and Company. It also appears on the first United States Geographic Survey of Upper Scranton to Archbald Area, circa 1880. An undated map from the collection of the Lackawanna Historical Society shows the lake as Paupack Lake. Earlier local histories show the lake as Cobb’s Pond, and a smaller lake as Mud Pond. The small lake was a marsh area until a dam was put in to raise the water level. The small lake is shown on all maps, but no name is given other than Moosic Lake. Today’s maps show both lakes as Moosic Lakes.

H. Hollister’s History of the Lackawanna Valley 1869, provides some insight into the relationship between early settlers and the lake: “the Wurts brothers once planned to use Moosic Lake to supply water to a canal for transporting coal over the mountain.” The plan never came to pass. Instead, the Wurts constructed a gravity railroad to handle the coal from Carbondale to Honesdale. One wonders what the lake would be like today if the industrialization planned by the Wurts brothers had ever taken place.

In researching this book, we did not have the opportunity to do first-hand interviews of employees, day-trippers, hunters or hikers about the early area at Moosic Lake. But we did find, in the archives of the Lackawanna Historical Society, an oral interview with Florence E. Robertson, the granddaughter of one of the lake’s owners, Edward S. Dolph. Without this interview taken by William P. Lewis, we might not know some of the early history of Moosic Lake.

Here is an excerpt from the interview, in Mrs. Robertson’s own words:

Moosic Lake the beautiful is situated about eleven miles east of Scranton. Nestled among spruces and oaks, is one of the clearest sheets of water found in Pennsylvania, fed by springs. Also known as Cobb’s Pond, in its early days.

The Moosic Mountain’s early name was Moose Mountain, as moose were supposed to be there, with deer and bear, and also called Cobb’s Mountain, but Moosic Mountain is the present name and happily called by all.

The Indians used Moosic Mountain as a path from the Delaware River to the Lackawanna, a trail about east and west. Across the lake – at the highest point were built signal fires. Also there were direction marks at the top of the mountain … I remember seeing a tree bent for directions down over the mountain. An Indian spring along the railroad bed still babbles refreshing water.

A Mrs. Mary Grier Davis, of Danville, Pennsylvania owned the larger part of the lake. Her home was at the head of the lake where a doctor now has a house, and nearby Mrs. Davis’s brother, Isaac Grier, of Danville had his home (where Walter Burke lives at present).

Moosic Lake came to the Dolph family about 1841. Edward Dolph, my grandfather, along with Mr. Crandall W. Thompson, owned one quarter of lake property. They were interested principally in coal – thought the vein might run along the mountain from Marshwood, Pennsylvania, where there was a breaker. Several bore holes were put down, in the hill back of Mrs. Davis’s house – but no coal was found. Mr. Dolph thought coal might run to the Dolph coal mines, on the other side of the lake, about four miles from Peckville. A. Winton, a coal mine was a short distance from Dolph mines. The Dolph breaker built in 1884 – burned and was rebuilt in 1894.

During the very early years, Mr. Dolph fished the lake – fished and cooked his catch at the Point on the lake – always been called Dolph’s Point.

From about the 1870s the Dolph families enjoyed camping at the lake – near the old log cabin site, at the upper end, where there was a spring and still is.

The families enjoy the lake, especially in summers – but not sight is more beautiful than in fall, when the leaves are aglow with their brilliant foliage, and all are thankful our grandfather found so lovely a spot.

The Pennsylvania Coal Company of Dunmore, Pennsylvania, ran a gravity railroad to Hawley, and in the Moosic Mountain Pass, a Scranton switchback called the Pioneer; this ran about two miles from the lake, crossing the roadbed leading to the lake. The families often went by the Pioneer train, stopping at crossings, and walked to the lake. Mr. Dolph would go by train, fish and start home. If the Pioneer was late, he continued walking home.

In 1874 the railroad company added more cars to accommodate the tourists wanting to go to the lake.

Mr. Dolph’s family was not the only campers at the lake – Mr. William Hull and family of Olyphant, pitched a tent, at the Taylor Boarding House, about where Mr. James Veras has his place.

Mr. Edward Beyea, an official of the Pennsylvania Coal Company, had a camp not far from the Grier house.

About 1890, Mr. Edward S. Dolph, built a small house at the point for his family and enjoyed going there until his death about 1939-1940. He was also a fisherman, as his father before him.

In 1893, a small cabin was built by Mrs. Elizabeth Dolph, widow of Edward Dolph. Later, around 1900, Mrs. Blanche L. Dolph built the present Dolphin on the same site now occupied by her niece.

The Catholic Cadet, camped at the lake for several years – about 1906 or thereabouts, with Rev. Father O’Connor and committee. Rev. O’Connor died some years ago. Camp was back of pavilion.

With train service and electric car service, there were many picnics held at the lake by churches, societies, and others – swimming was always enjoyed.

There were many cottages there now, but it is still the most beautiful spot to the Dolph-Robertsons.

The Dolphs’ interests were made up of several tracts of land – Abram Singer Tract, John Singer Tract, David Morton and John Morton Tract.

Late, September 17, 1959, I am sorry to be obliged to refuse your request of last, I am not capable of getting up a paper for your meeting.

People have had a fascination with lakes for centuries, attracted to them for different reasons. It may be solitude, rest, leisure, relaxation, or recreation. Our counterparts at the turn of the century shared these ideas, even though they were limited in spending time at lakes because of transportation.

In the pages ahead, we will continue to develop the history of Moosic Lake. In the course of doing so, we will uncover a transportation story that helped bring the idea of Moosic Lake to a reality for the working man as the gateway to the clouds and one of the most picturesque routes east of the Rockies.

This is an excerpt from Gateway to the Clouds The Story of a Short Line Railroad The Scranton, Dunmore, Moosic Lake Railroad 1902-1926 by Alan & Judy Sweeney